Seems my theme lately has been to go back and restore some of the models I built first in my first Gunpla year. Some of you saw this kit already released as "weathered" Gundam ...but naaaah, I can do better than that now and i'm going to tackle this guy much like I tackled the Turn A Gundam that was recently completed. Don't worry, I know some of you love the shield and that's not going to change much, however the suit itself needs some work and I will get it looking better.  I already started cleaning up the right leg and got rid of the stupid 'sharpee-like' silver markers I used and some applications of the Tamiya Weather Master that weren't very good. I don't have to be perfect in the 'clean  up' process because it's going to be dirty eventually anyway, i'm cleaning some of this up and leaving shades of the clean up to make a foundation to start on. Well that's that for now, off to work then I'll probably work on this later. Keep up the Gunpla, Newtypes! 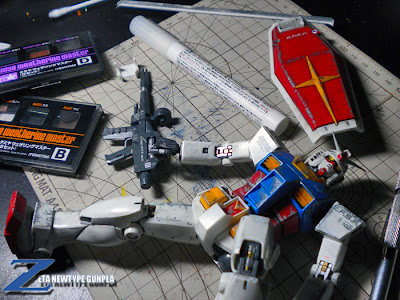