So I'm a dork, let's get that over with right away, I want a little back story to my custom build since it is technically my first so I've hashed out some simple details and a 'card' of sorts to give you some info about my custom MSV Nemo I am building, aptly called the Nemo Atmospheric Assault. Now to the nitty gritty, all the following work is pure fiction, it may conflict with Gundam canon, but it obviously is not. It's all in good fun, people. :D 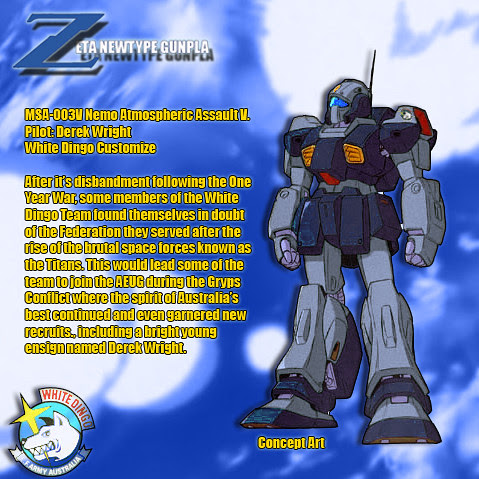 The MSA-003V Nemo Atmospheric Assault customization loadout was rumored to be developed by the chief engineer on the Argama, Astonage Medoz, to assist the Argama in atmospheric combat when descending to Earth. This loadout included many features that increased the long range effectiveness of the stock Nemo mobile suit, including the prototype long beam rifle which was later used in the G-Defensor and ultimately the RX-178+FXA-05D Super Gundam. The Nemo Atmospheric Assault did not see much combat as it was developed later during the Gryp's Conflict against the Titans of the Earth Federation. Rumor has it a group of these Mobile Suits were used by surviving members of the White Dingo Team from Australia, famous for their victory in Australia. The only confirmed fact was the young ensign on board the Radish named Derek Wright who piloted one of this machine with the White Dingo Logo emblem upon it. It is not known what became of these machines or the White Dingo after the Gryp's Conflict.
Posted by ZETA NEWTYPE at 3/15/2011 05:53:00 PM