Decal Work and some Weathering!

Update time! I went back to the Gegloog Ver. 2.0 for a bit more touch up on it. I applied some waterslides and became a custom decal job along with some slight test weathering tests as you can see in the picture below. I picked up the some Tamiya Weathering Master systems, and so far I like the effect it achieves, it's a cheap and easy way to do weathering for a novice like myself. This is also my first venture into using pins as you can see in the lower part of the model, I really like the effect it achieves.

I'm delaying the Unicorn and Mk. II projects for some pretty ambitious reasons, well atleast for the Unicorn. The Mk. II 2.0 will be something I am looking at to experience my first use of after market products. If my plans for the Unicorn go through I can safely say it will be the gunpla experience of the year for me, however, I already managed to damaged some of it's parts so i'll have to replace some of them before working on it again, which is another reason for the delay.

The Strike Freedom Project is coming along nicely, will probably get to the decals this week but I have a small distraction that's called the Wing Gundam! Yep, started watching Gundam Wing again and it's kicked off my drive to build the Wing Gundam and i'm sure the Deathscythe EW will follow it! The Wing Gundam is definitely a smaller build especially coming off the Nu Gundam build which was a large kit. There's a photo below showing the progress, I am not liking the eye decals I will be removing that and doing a paint job for the eyes. LED work will go into this kit, I intend to light up the eyes and the chest piece in the middle.

I have figured out my Gunpla New Year's Resolution! Alot of this community has inspired me with their New Year posts to their blogs about HG kits, I own one HGUC kit, which is in pieces for painting, and that's GM Command Space Type.  I would really like to give HG kits more of a chance because until now MG has taken up most of my interest but I see alot of praise to the HG kits lately and I wanna get in on that action, especially since it's a cheaper alternative to MGs! It will have some challenges though, especially with the upcoming MG ReZEL Commander Type. These UC Kits are amazing and I'm loving every one of them that come out.

Keep up the Gunpla, Newtypes! 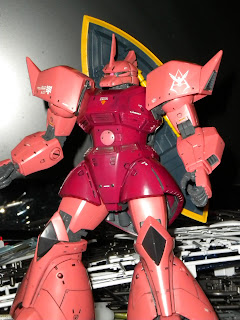 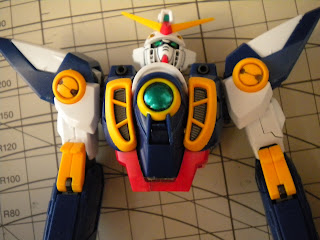