Well, well, well, i'm working on High Grades a lot more these days probably due to time restraints and damn, did HGs ever age well. Before my massive break, HGs were a huge pile of garbo typically and now they're barely a step behind. This definitely the case with this remaster of the HGUC Zeta Gundam. I'm loving this kit so far and it's perfect for doing my own custom colors finally. It's only my favorite Gundam.

That's a good looking machine and cuts a better silhouette than ever.

Godhands and a HG? I'm not using them as my main cutter, don't worry!

Chest was easy breezy. This kit is a parts former so it's less on the transformation engineering. 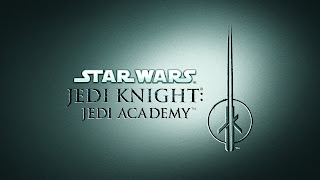 Star Wars Jedi Academy just dropped on Nintendo Switch and Playstation. I'm excited because not only is that a quality single player game, but the multiplayer is amazing and the Switch port has it intact. This should breathe new life in a fantastic classic game.

Star Wars Jedi Academy is available for $19.99 USD for Digital Release Only.
https://www.nintendo.com/games/detail/star-wars-jedi-knight-jedi-academy-switch/

Wow. Been awhile. Where to begin? Well, it's COVID-19 mania around these parts and me and the wife have been self isolated like responsible people and that leaves me with plenty of Gunpla and Vidja, that's for sure.

If I can put Animal Crossing and Doom Eternal ( I went hard on that meme) down for a bit. I have been chugging away at MG 1/100 Nu Gundam Ver. Ka which has been embarrassingly in progress for years now. I also am wrapping up the RG Full Unicorn Gundam which I love aside from those damned waist pieces. I'll have posts for those finished kits. There's been a quite a few finished kits since I took this long hiatus of blogging as well, i'll get those up.

As far as WIP Posts, I have one lined up for the HG Zeta Gundam Revive and the RG Zeta Gundam to celebrate the relaunch of the blog. I have cool plans for the HG Zeta as it will probably be one of the first kits I test my new airbrush on that my wife got me for Christmas. The weather is turning warmer and hopefully soon this virus will fade away as well. Stay tuned for Part II as I try to organize my backlog and WIPs into one coherent post. Oh boy.

Welcome to the launch of ZetaNewtype.com. It's a relaunch of my former Gundam Modeling (Gunpla) blog and for the most part this will be a continuation of such, along with more musings about other aspects of Gundam, Video Games and more. My last post was May of 2011. Pardon my dust as I tweak various things around the place for spring cleaning and get prepared for delivering the news.

The Recent Haul of Gunpla

I feel like I've been buying more gunpla than building it lately....Gotta fix that! Anyway. Here's all those kits I've been accumulating over the last month! I'm really excited about these kits, so that should fuel some good work in May.....Hooboy, now to write up May's Argama Hangar. Get REAL, Would ya!? Part I - A ZNG look at Real Grade series!

I may be a little late to on the boat but I wanna comment about the recently launched Real Grade (RG) series now that i've gotten my hands on one and another one is on the way. So far i've built about maybe half of the RG RX-78-2 Gundam and let me tell you....it's something different, it feels like a MG in 1/144 size! The frame is pre-assembled and that scared me a bit, a bit due to others impressions and just looking at them! Do be CAUTIOUS as you can break the things without working them out a bit first. What I mean by working it out is taking the frames out of the gates and bend them at the joints SLOWLY before building, loosen it up then build upon it, you will find posing much more easier afterwards. 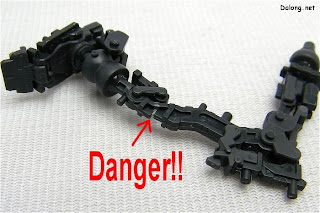 Do NOT let this happen to you. :D Image from Dalong.net. Thanks for the tip!
RG introduces something that needs to come to MG and that is the multi-color armor pieces that give a radical degree of detail over just the same flat color over the entire armor. This is difficult to explain so take the following pic from Dalong.net into consideration. 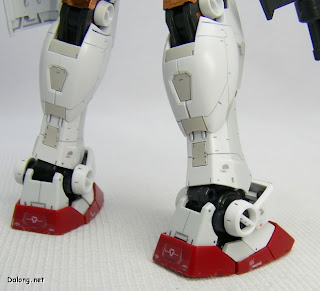 Notice the white and duller white colors? Interesting huh? Image from Dalong.net
Another staple of the RG series is the decals.....which is tricky, see, the decals they provide are all stickers....which are supposed to be the mortal enemy right? I've seen builds that make stickers look good with RG kits, but Bandai does offer the waterslide decals separately, which I'm opting for to decal my builds because I'm going to paint both of my RX-78-2 and Char's Zaku II. 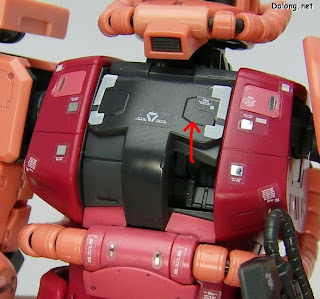 Stickers will always be stickers! Go Waterslides, will ya!? Image from Dalong.net
That wraps it up for Part 1 of looking at the RG series! Stay tuned for Part II with my own builds showcasing these two and perhaps a special appearance by the RG Strike Gundam! Special thanks to Dalong.net for images and all the hard work on reviewing everything Gunpla! Keep up the Gunpla, Dalong!
Posted by ZETA NEWTYPE at 4/23/2011 12:56:00 AM No comments:

Hey, my main blogging is definitely here but Facebook and Twitter is a quick easy way to get comments out there and get feedback quickly so please enjoy these add-ons to the Zeta Newtype Blog!

And hey, why not? Wanna play XBOX Live or PS3 with me?!